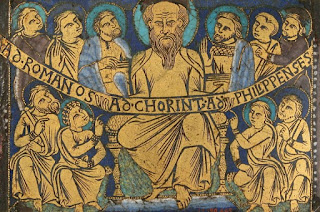 Tradition of the Fathers verses Bible Only

I have been studying the 1st thru 3rd century of Christianity so I could get a better understanding of what was happening and being said before the Bible was canonized.

For these first three centuries of the Church there was great opposition. The Christians lived under the threat of persecution unto death in all sectors of society. The two main forces in culture they faced was heathenism (the prevailing idol religions and philosophies in the day) and the Jewish religion. As we know Jesus was brought forth from God’s special election of the Jewish people. I dare not speak negatively of the Jews, but the Church in their attempt to complete the Jewish religion, break the yokes of Judaism and present the Gospel to the world (Gentiles), they faced many adversaries and pushback from the believing and non-believing Jews. I don’t want to minimize God’s plan to one day see the Jews embrace Jesus as Messiah.

The first ten to fifty years of the Church was a struggle to legitimize how God had by design brought the Gospel out of the progression of the Jewish culture. All Christian theologians will agree, God’s dealings with Israel was a grand design to introduce Jesus and the Father’s redemptive plan to the world (nations). But the Jewish traditions where not that easy to break away from. (Jesus Himself often spoke against His people’s traditions.)

The heathen world was a different story. Their pagan gods and the philosophies of their sages helped them merge nature with human behavior. Overall, the heathen world was morally broken and always needed strong government to keep it from imploding on itself. We can see how the Roman Empire had to wielded brutal force at times to control populations.

The Church, early on, started to take the Gospel to the non-Jewish world.; first through Peter and then through Paul.

Let me get back to my subject; tradition of the Fathers verses the Bible. (I use the Bible here to mean scripture only, or the canonized books of the Bible)

I know that some of the things I am about to say are my opinion. I have availed myself of the knowledge of the Christian writers from the 1st thru 3rd centuries. (My main sources have been Schaff, Philip. History of the Christian Church & Ecclesiastical History: The Complete 8 Volume Edition of Schaff's Church History & The Eusebius' History of the Early Christianity. I am impressed by their scholarly presentation of information from those times.)

The canonized Bible came into major acceptance in the 4th and 5th centuries. Before then the scriptures were mainly letters circulated among the Christian communities. These letters were considered divinely inspired because the writer had to be one of Jesus’ direct apostles or having been mentioned by one of them. Also, there was many letters circulating that did not carry the original apostle inspired standard.

Now where the “tradition of the Fathers” carries weight is through the ecclesiastical leaders that followed the original apostles. They were charged with taking the Apostles’ doctrine to the next generation. The question was, did they agree and stay on point?

The standard, for both the canonized Bible and the tradition of the Father, must line up with the Apostles’ Doctrine.

Acts 2:42 And they continued steadfastly in the apostles’ doctrine and fellowship, in the breaking of bread, and in prayers.
Matthew 28:20 “Teaching them to observe all things that I have commanded you; and lo, I am with you always, even to the end of the age.”
Romans 16:17 Now I urge you, brethren, note those who cause divisions and offenses, contrary to the doctrine which you learned, and avoid them.

Now Apostle Paul did warn of deceptive doctrines in the following verse.

1 Timothy 4:1 Now the Spirit expressly says that in latter times some will depart from the faith, giving heed to deceiving spirits and doctrines of demons,

The teachers that followed the original apostles were called Apostolic Fathers. After studying these Apostolic Fathers, I have respect for them but am cautious of some of their deviations from “sound” doctrine. They were interpreting what had been passed down to them.

Let me insert a NOTE: I know there is the logos Word and the rhema Word. Logos, the word written being clear in its meaning and the Rhema, being the Word breathed on or enhanced by the Holy Spirit. The fact is, there is no way a person or one church can know the fullness of God. I do believe that the Bible has the full counsel of God but to know and understand it all is beyond our human ability. God opens our understanding as He wills (releasing the rhema, deeper meaning). Therefore, there are going to be differences in interpretation that reflect personal, cultural and regional needs. I am confident if we are truly seeking with a pure heart, we will find what God has meant for us to understand and in the end it will not be a matter of contention. Unity does not have to be uniformity.

But there was contention among these Apostolic Fathers. At times it got bad. The original apostles did set a good example in Acts 15 at the Jerusalem Counsel. The Church leaders (Bishops, Deacons, Priest) would at times pull these counsels together to air out their differences. The counsels helped to limit the differences by setting forth creeds.  They would meet, come to agreements in light of scriptures (or in light of the traditional teachings of the original apostles) and then put forth a creed for the believers to follow.

Then there arose the Catholic church, specifically the Roman Catholic Church. Now the RCC will say they just naturally emerged from Jesus and the Apostles. As the Gospel penetrated the Roman Empire there was many streams or regional churches that formed. In those days, everything flowed in and out of Rome. Therefore, Rome became the central point of Christianity and the Church leaders there were looked to as having a perceived authority.

I grew up among Protestants. As Protestants, they rarely had anything good to say about the Catholics. After this study I now have a respect for how the Catholics helped eliminated the excessive interpretations of doctrine.

Now here is where I get in trouble with my Catholic brothers. I feel like they over institutionalized the church. In the organization of the Church I feel there was a quenching of the Spirit. Then I look at the Protestant churches and I actually see the same thing. As we organize and put in place human structure it is easy to corner the spirit; that is, we pay less attention to the guidance of the Holy Spirit.  I have seen healthy church structures where leaders pay close attention to the Holy Spirit.

The conflict over the “Bible only” and “tradition of the Fathers” is not really a conflict at all. Both must be empowered by the Holy Spirit or they are dry. I did not mean the Bible is dry. What I mean here is that the Bible and the traditions of the Fathers must be understood from a divine perspective.
I am convinced that if my heart is right and not judgmental, I can be in the mist of any church service, liturgy, traditional or charismatic, and be blessed. I need to always look for the redemptive element.

I remember once hearing Eric Johnson say the following. He talked about a liturgical minister that made this statement, “Problems are like walls, you Charismatics aggressively attack it until it is demolished, where with us, we rise above it with liturgy.”

My renewed interest in Church history came about because a Catholic brother encouraged me to read the “Tradition of the Fathers”. I now have a greater understanding of how they influenced the Church, for good and for bad. I intend to continue reading on through the other centuries of the Church and may add future articles to this blog.

Please comment and give feedback
Posted by ISTgroup at 6:56:00 AM