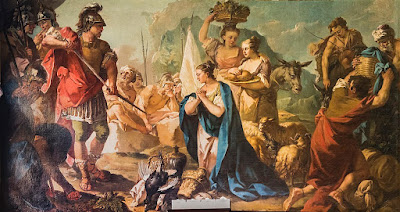 Matthew 5:16 Let your light so shine before men, that they may see your good works and glorify your Father in heaven.

I was reading chapter 5 of Matthew until I got to verse 16 and I stopped to meditate on it. I felt the Spirit had something deeper to say. Then I saw a reference in my Bible for 1 Samuel 24. Ok let me see what that says. I turned there and begin to read about the conflict between King Saul and David.

Earlier chapters in 1 Samuel speak of how David had to flee from Saul. He gathered to himself four hundred men and formed an army. (1 Samuel ch. 22) Saul, seeing this as a threat, assembled three thousand men to go after David. David and his men were hidden in a cave and King Saul took leave to go into the cave to relieve himself. Evidently Saul had laid his robe down and David slipped up and cut off a corner of the robe. David’s men were telling him, “Look the Lord has delivered your enemy into your hands.” (1 Sa. 24:10) But because of David’s righteousness, he knew he was not to touch God’s anointed. Although the anointing had departed from Saul, David honored the king’s office.

Acts of kindness are not always in line with convenience.

After Saul left the cave David also came out and called out to Saul, “Why do you listen to the words of men saying, ‘Indeed David seeks your harm’? Look, this day your eyes have seen that the Lord delivered you today into my hand in the cave, and someone urged me to kill you. But my eye spared you, and I said, ‘I will not stretch out my hand against my lord, for he is the Lord’s anointed …’” (1 Sa. 24:10) David goes on to try and convince Saul there is no ill intentions on his part against the king.

Saul’s response was of remorse, saying, “You are more righteous than I; for you have rewarded me with good, whereas I have rewarded you with evil…”. (1 Sa. 24:17) Saul goes on to acknowledge that David had showed mercy. Saul even acknowledges what Samuel had proclaimed to him before, that the kingdom would be taken from King Saul and given to David. The result of this encounter was that Saul was sorrowful but not to the point of embracing David.

Here we see a response to righteousness that is two-faced, not sincere. Forgiveness is temporarily acknowledged but bitterness remains. We know this, because in chapter 26 we see Saul coming after David again.

Chapter 25 takes us to the story of Nabal.

Nabal was a rich businessman in Carmel. Although the text does not explain how or why, but evidently David’s army was indirectly providing protection for Nabal’s men while they were going about their business. David and his men were hungry, so they sent a message to Nabal asking for food.

Nabal outright refused David’s request and belittled David as a person of no status. So, David assembled his army to go and deal with Nabal because he refused to show kindness where kindness had been given.

But Nabal had a smart wife. The Bible says, “And she was a woman of good understanding and beautiful appearance.” (1 Sa. 25:3) Her name was Abigail. She understood the grave situation especially after the young men told her of how David’s men had gone out of their way to protect them as they sheered sheep. Abigail knew this was a situation where kindness was due for kindness that had been given. She knew also that her husband’s pride and stubbornness was going to get them killed.

So, Abigail secretly, unknowing to Nabal, assembled bread, wine, lamb meat, roasted grain, raisins, and fig cakes, loaded on to donkeys and she slipped these things out of their village to David and his men. David received the gifts of substance from Abigail and his anger against Nabal subsided. Actually, David saw the Lord’s hand in the bold sacrifice of Abigail.

So, we have here three responses to kindness given.

First David spared King Saul’s life and Saul outwardly showed kindness but as you read in chapter 26, at a later time Saul came once again to kill David. We have here a two-faced kindness that is a response that accepts the kindness and then only returns kindness because it is expected. Saul’s heart was not changed.

Now Nabal just out-right felt no obligation to return kindness for kindness given. He was so selfish that he could not see beyond his stubbornness. These are people that are so wrapped up in themselves that they can’t see the blessing in the kindness.

But Nabal’s wife, Abigail, returned true heart-felt kindness for kindness given. She gave even to the point of risking her life.  She could see the power of kindness to defuse a bad situation. For her correct response she unleashed a blessing from heaven that not only saved her people, but she was blessed to have her whole life changed.

As the story goes on, Nabal threw a feast and got very drunk. The next day, after he had sobered up, Abigail told her husband what she had done. The Bible says, “… that his heart died within him, and he became like a stone. Then it happened, after about ten days, that the Lord struck Nabal, and he died.” (1Sa. 25:37-38) This could have actually ended bad for Abigail, with no longer having a husband that provided well for her; but David took her as his wife and she became part of the house of David.

Let me give an added dimension to Abigail’s response. Her response begun with a deep apology. She took up the position of an intercessor. (1 Samuel 25:23-31) She apologized for her husband and took on the guilt as if it was her own. This is the power of an intercessor to really touch the heart of God and unleash mercy.
Posted by ISTgroup at 7:01:00 AM