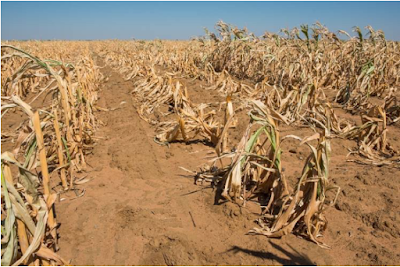 Praying for Serbia.
Damage to crops from drought to exceed USD 1bilion.

The drought has reduced agricultural output by about 20 percent compared to the average annual yield, and by 30 percent compared to the previous, record year.
That is why the lost value exceeds a billion dollars, says Milan Prostran, an agriculture expert.
"The average annual agriculture production value in Serbia ranges from five to six billion dollars," Prostran said.

He added that by the end of the season, the situation could improve - but could also worsen - and that the rain, which fell on Saturday in much of the country, has helped the plants recover a little.

"High temperatures have mostly destroyed corn, that makes up 20-25 percent of the total agricultural production, and it is grown on 1.1 million hectares," Prostran said.

"Within two weeks, the deadline for autumn sowing begins, so everything that can withstand low winter temperatures - wheat, oats, barley, rye and rapeseed - should be planted," Prostran said.

This expert added that the spring sowing should begin "a month early to avoid high temperatures and drought [next year]." >Read More<
Prayer Points:
1.    The Bible tells us that when Israel was given over to sin, the wrath of God was often a drought. Let us pray that Serbia would examine themselves and turn toward moral values. Moral values can include: government vs. the people, the people’s attitude toward the government, business principles, government and the people’s attitudes toward foreigners and relations with other nations especially Israel.
2.    Let us pray for blessings to come upon Serbia. Pray that the mercies of heaven will be extended to Serbia so they may fully turn to God Who loves them as an important nation upon the earth.
3.    Serbia is strategically placed in the Balkans to be very influential to the region. Serbia can bring balance to the Balkans when it operates in truth and righteousness. Let us proclaim that Serbia will step into its Godly destiny.
4.    May the intercessors of Serbia rise and take their place on the wall. Where is the Elijah who can call down rain? May there be such a blessing come upon Serbia that even her enemies will come to buy grain.
5.    Here at ISTgroup, we look for the day when Serbia has dedicated intercessors that cry out daily for the blessings of heaven to touch Serbia. Let us pray for a house of prayer in Serbia along the lines of the Tabernacle of David. (Acts 15:16-17)
NOTE: You might think we are overly critical of Serbia. Please know that this is not in our heart. Each nation has its challenges and God desires that all nations be “Sheep nations”, (Matthew 25:31-36) and we are believing Serbia will be one of those.