A Christian Responce to Coronavirus 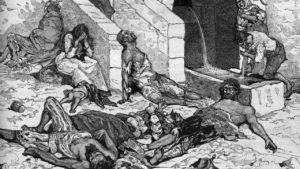 Julian, was Roman Emperor from 361 to 363, as well as a notable philosopher and author in Greek. His rejection of Christianity, and his promotion of Neoplatonic Hellenism in its place, caused him to be remembered as Julian the Apostate by the Christian church.

Julian the Apostate traced the rapid spread and power of that religion [Christianity] to three causes: benevolence, care of the dead and honesty. After the persecution under [Ceasar] Marcus Aurelius, the Christians in Southern Gaul were much distressed because the enraged heathen would not deliver them the corpses of their brethren for burial. … During the ravages of war, famine and pestilence, they considered it their duty to bury the heathen as well as their fellow-Christians. When a pestilence depopulated the cities in the reign of the tyrannical persecutor Maximinus, “the Christians were the only ones in the mist of such distressing circumstances that exhibited sympathy and humanity in their conduct. They continued the whole day, some in the care and burial of the dead, for numberless were they for whom there was none to care; others collected the multitude of those wasting by the famine throughout the city, and distributed bread among all. So that the fact was cried abroad, and men glorified the God of the Christians, constrained, as they were by the facts, to acknowledge that these were the only really pious and real worshipers of God.

Jesus said to take the Gospel to the whole world. These 4th century Christians did their part. It was noted by the unbelievers, that the Christians were not just empathic to the sick and dying but walked into danger to be servants to the culture.

As history shows, most hospitals and benevolent organizations were started by Christians.

So, what should be the Christian response to this Coronavirus?

First of all, our fore-fathers plus the scriptures show us not to fear. As Christians we should be ready to show the unbelieving world we do not panic from the spread of Coronavirus. Yes, we should take personal causation. But if the institutions of society break down, we need to put our lives on the line to help where help is needed.

I remember when the Katrina Hurricane ravaged New Orleans and southern Louisiana. The churches in the southern United States stepped in to house those whose homes had been flooded, feed them and in the end helped repair homes.

The proper response for the Church is to be fearless and to be ready to be a physical witness.
Remember what a heathen Caesar said about Christianity, “Julian the Apostate traced the rapid spread and power of that religion [Christianity] to three causes: benevolence, care of the dead and honesty.”