Some Good Things are Happening in Zagreb, Croatia 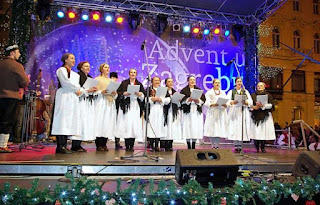 Jeremiah 29:7
And seek the peace of the city where I have caused you to be carried away captive, and pray to the Lord for it; for in its peace you will have peace.

A motivating verse for us at ISTgroup. Although we are not captives in Zagreb, we are commanded to carry a burden for this city. God and His Word has a solution for what troubles Zagreb; the economy, government and all other institution that exist here.

Let’s look at a few things presently effecting Zagreb and its people. Last week we focused on some negatives regarding Croatia, this week we want to highlight some positives. The Advent events in Zagreb give the churches here a chance to present music and drama in the main square.  Also an article of an interview conducted with a leading entrepreneur in the city.

Advent in the Heart of Zagreb is a series of holiday events held on the city’s squares, bringing the spirit of Advent and Christmas to guests and citizens of Zagreb through a rich musical and artistic program. Interested citizens, guests and passers-by can enjoy various programs by numerous cultural societies, children’s choirs, drama ensembles, dance groups and music bands, or shop at fairs tailored for the occasion.

The city actually encourages the churches, even evangelical churches, to participate with presentations of music or drama reflecting Christmas themes.

Interview with a leading entrepreneur in Zagreb by Total Croatia News (Reporter: Paul Bradbury) . <More of this interview>

Comments of Saša [last name withheld], a leading entrepreneur in Zagreb -
Recent reports indicated that Croatia has the largest number of start-ups in Central Europe, as well as the best start-ups in the Balkan region. Why is that do you think, and tell us a little about the business climate in modern Croatia.
Sasa: Croatia was the first to start building a start-up ecosystem, and now we are starting to see the benefits. It is still not a significant improvement, but more and more creative people are encouraged to start projects based on their knowledge and execution of great ideas. Of course, the government had nothing to do with it, it was a result of a few initiatives that arose from the community. A few years later, the government jumped on the bandwagon and started promoting start-ups by giving some grants. Again, those procedures were not really compatible with the mentalities of start-up founders, but they were better than nothing. In general, the business climate in Croatia is far from ideal. Entrepreneurs are still perceived by the majority of government officials as something not so positive, procedures are complicated, the legislative framework is illogical and constantly changing. For any interaction with local or state administration, you need to spend too much time and nerves when the focus should be on the business at hand.

Your thoughts on UBER, a cheaper taxi service in Zagreb.

Saša: The negative reaction of established taxi companies didn't surprise me at all. We are over-bureaucratized on all fronts. Groups that enforced the so called 'regulations' were already violent when any kind of competition was seen on the horizon. So, they were opposing Uber even so that Uber would come not as a total competitor, but as an extension to their existing business model.
Uber,is a low cost taxi service under fire from “the established taxi service providers.” This is a sign of better and more efficient businesses overcoming Croatia's notoriously problematic bureaucracy and unreasonable regulations.
More on Uber:  http://mashable.com/2015/10/22/uber-arrives-in-croatia/#6WbaUOQ4G8qn

Pray Points: Let us pray for the economic atmosphere of Zagreb.

1)      We thank God for the open doors and favor the churches receive from the city to participate in the Advent. Pray that more churches take advantage of this opportunity and begin planing now, as it is a great tool to reach out and evangelize. Additionally, public opportunities such as this will help erode the common belief that all non-catholics are sects.
2)      Here at ISTgroup we are passionate about seeing people reach their potential, and many have the entrepreneurial bent. Pray that the general opinion of government officials would begin to change in favor of small business which can really bring help and healing to the economy which is on life-support now.
3)      We want to ask You, Lord, to break the old order of business in Zagreb. May the “old guard” that has held back the city from progress be diminished or reformed. May the Lord give small businesses such as Uber, the fortitude and resources to stand their ground against the bureaucracy.
4)      Corruption is still wide spread in these formerly communist lands. May the new entrepreneurs coming forth in the city be honest and motivated by sound principle.
5)      Lord, bring more Christians into the business atmosphere of Zagreb. May they have favor and an open door to integrate Christian principles.
6)      Pray for ISTgroup and what part we are to play in sustainable development. There is a large population of well-educated young adults who are unemployed. Pray that the Lord give us the right strategies and the right people to help make an impact.


7)      Let us pray for Saša, mentioned in the above interview. Although we do not know him personally, may he come to know Jesus and may his business be blessed as a result.

Thanks for your Prayers for these concerns.
Posted by ISTgroup at 5:10:00 AM