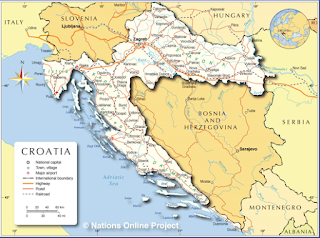 At the Upper Room House of Prayer (HOP) in Zagreb we pray for the nation and we expect results from His throne. This News Article brings up interesting things about Croatia, and we would like to pray into some of these issues this week.

In the News: Health Minister: “One Priest Is Worth More Than 20 Physicians” 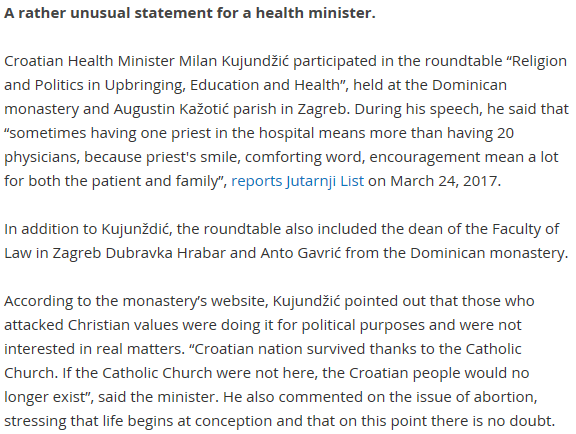 This article is interesting in several ways:

1)    That a health minister would make such statements are in some ways signs of progress, yet in other ways not. As Christians, we do believe we are to bring Biblical truth into government, and in all other influential areas of society.
2)    A good aspect of Minister Kujundzic’s comment is that he validates the importance of the spiritual needs and not only the medical needs of patients and their families. 2)    Proverbs 15:30 The light of the eyes rejoices the heart, and a good report makes the bones healthy.
3)    Then there is the third point from the statements he made about the Catholic churches roll. This can be disturbing, “Croatian nation survived thanks to the Catholic Church. If the Catholic Church were not here, the Croatian people would no longer exist”. This statement pretends to give credit to God, but shortly after the formation of the nation, there was an altar built and a special ceremony held to dedicate Croatia to Mary. The Croatians rallied around the Catholic Church to strengthen their resolve during the war that broke up Yugoslavia. The sad reality is that most commonly, Jesus is not exalted in the Croatian Catholic Church but rather Mary. We do believe that Mariology, as defined by the Catholic Church is a false doctrine.
4)    We cannot leave out however, that we are seeing significant hunger and forward movement specifically in the Charismatic Catholic movement here. In these groups, even though they still pray to Mary, we see a growing focus on Jesus.
5)    Another real positive in the article above is that minister Kujundzic did make a stand for the life of the unborn. For the Health Minister of a country that has legalized abortion to make a pro-life statement like that, is really positive.

Prayer Points:
1)    Let us pray for Croatia. We at Upper Room Zagreb HOP have been praying for the government and the health minister’s statements yield encouraging forward movement in regards to the unborn especially.
2)    Pray for this minister, that he will stand true to his statements and that he would not waiver in the face of opposition. Sometime politicians just say things to please their audience. Pray that he really meets Jesus.
3)     Almost daily we pray for the spirit of freedom to overcome the spirit of religion. This spirit has two main faces in Croatia; apathy and division. Pray that Jesus would be lifted up and seen for who He really is.
4)    Pray that the Lord would raise up believers in Croatia that desire a relationship with Father, Son and Holy Spirit. Pray that the churches (all churches) would teach relationship not religion.
5)    During the Lent season the Catholics come out strongly against abortion. Pray that Evangelicals would join in this, overcoming their personal prejudices against the Catholics. Pray that this cry against abortion would be heard in the government offices.
6)    Pray for the IST Group and our HOP; we have had some spiritual battles this month. Pray that we will continue to be a light house for many and a spiritual force to confront the enemy.


Please leave a Comment or Reaction so we will know you Prayed.