Pray for Ljubljana, Zagreb and Belgrade 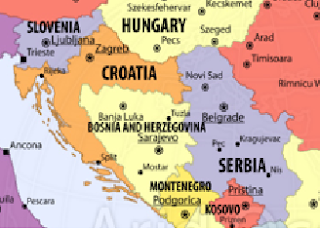 Pray for Slovenia, Croatia and Serbia

“Revival comes when the grip of darkness over peoples or territories is broken or weakened, and the Holy Spirit is allowed to gain more control, bringing a greater manifestation of God’s Kingdom and His purposes.” Pastor John Mulinde, Uganda

Last week we completed a very intentional and on sight prayer strategy for Ljubljana, Slovenia – Zagreb, Croatia – Belgrade, Serbia. Intentional Strategies for Transformation joined with a very professional team of prayer warriors under the leadership of Henning Schikora of Operation Capitals of Europe. (www.oceprayer.com) Principalities were confronted in the spirit and we know our God extended redemption into these three cities and nations.

Tuesday evening Zuzanna and I drove back into Zagreb after finishing up in Belgrade and we could sense that something had changed. This was the first time we had been involved in spiritual warfare at this level so it was a learning experience for us. It totally amazes us how God works through spiritual acts to advance His Kingdom’s influence over nations. He, the Lord, assembled sixteen people from seven nations to break bondages, set up spiritual boundaries and bless the local believers.

1.    Slovenia, is a country with a split identity. For centuries, it has been torn between East and West. A pastor in Ljubljana told us that even now the people have a hard time of thinking of themselves as a nation. It is not that they are fighting against each other but rather there is just no sense of unity and no strong identity. Slovenia is also a leading country in suicides.
a.    In this age of God bringing forth nations, let us pray for Slovenia to find a common bond. May that bonding be a work of the Holy Spirit.
b.    First, we ask for a unity of the churches. May the spiritual leaders of Slovenia find common ground and walk in unity.
c.    We pray for a healthy nationalism for Slovenia that has an influence for good on its European neighbors.
d.    Slovenia has a strong calling in the area of the arts, yet the enemy has taken their gift. May godly artists arise in Slovenia and take back this sphere of influence. Lord, humble and guide the leadership of Slovenia in all spheres of society.

2.    Croatia is such a diverse and beautiful country. The Croatian people corporately don’t know what they have. Pray that Croatians would realize God’s desire to form into a country that blesses many.
a.    It is obvious that the blessings for Croatia are held back because of injustice in its established institutions. Lord, we pray for exposure that results in legal and moral justice.
b.    Those that have the privilege to travel to Croatia will see the great natural treasures. Every summer, millions of foreigners, especially Europeans, come to vacation in Croatia. This is why the atmosphere of the country is important. In order for Croatia to be a blessing to Europe and the world, the people must have a welcoming attitude. Pray that Croatians will learn to “Bless the Guest”.
c.     In Croatia, there is a heavy influence from the Roman Catholic Church. This is a religious spirit that brings bondage. As the Bible says, where there is darkness the light shines brighter. We have seen a move toward unity among the evangelicals and a surging forth of Catholic Charismatics. Lord, we pray for both of these movements to gain moral ground and shine like a city on a hill.

3.    Question; Can anyone tame Serbia? Answer; Yes, the Lord can. Serbia is a country of warriors; It is just built into their nature. Look at their history, they have survived the greatest of tragedies.
a.    Just think of what could be possible for Serbia if their warrior spirit could be turned against Satan. We have heard a prophetic message more than once, “That when Belgrade burns for Jesus, the whole of the Balkans will be blessed.” We cry out: Lord, let it be, in our lifetime!
b.    Belgrade has been a fort, village, city and metroplex for about 2,000 years. It sits at the place where the Sava river merges with the mighty Danube river. It has been leveled to the ground in various wars 45 times. This city has never obtained the glory it should have. Let us pray for a spiritual transformation in Belgrade that brings the glory of God.
c.     What would it be like if Serbia stood up to show forth God’s glory? According to some, Serbia is further along spiritually than Slovenia or Croatia. There is a HOPE in Serbia that is waiting to be unleashed. Let us pray for the release of this hope.
d.    There is a unity stirring among the evangelicals in Serbia that is healthy. The pastors and church leaders are grasping the revelation that there is strength in unity.

Please leave a Comment or Reaction so we will know you Prayed.
Posted by ISTgroup at 9:01:00 AM