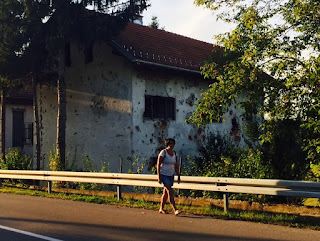 In preparation for the next IST project, Zuzanna just completed a prayer-walk across Croatia. The primary purpose of this walk was to release God’s blessing and transformative power, invite His glory and presence to this land. A part of this walk was to target specifically the Lika area of Croatia. The 305 km or about 200 mile walk which Zuzanna completed is quite a feat, and her blistered and aching feet tell the real story.

Lika is an area totaling 5,000 sq km or 2,000 sq miles in the heart of Croatia. The population of Lika is about 50,000 with no evangelical community of any kind. Lika experienced a major displacement of its population in the 1991-95 war that broke up the former Yugoslavia. During the war between Serbian and Croatian ethnic groups many Serbs left due to the fighting. The war ended 23 years ago, yet many of those who remained in these areas, to this day live in homes damaged by bombs and shelling. There are believed to be over 46,000 land mines still unaccounted for today in Croatia, and a large portion are in Lika. Restoration is slow and spotty. Jobs are scarce and hopelessness is rampant. We believe that a cry for justice was heard during this prayer walk. There are many villages and small towns which resemble places frozen in time, but there are three main cities in Lika which we are initially focusing on: Gospić, Otočac and Gračac.

God is connecting the dots! As we have formed an advisory team specifically for the Lika Project, we are encouraged at the level of interest by key leaders. We also see that God has already been preparing key individuals and He is very rapidly connecting us with them.

The Upper Room HOP
The house of prayer is going exceptionally well. We continue to meet five days a week praying and inviting His presence to invade earth. We had a testimony time the other day and we realized God is working in all the ones attending. One lady’s business is showing increase and another man has picked up a guitar after many years of resenting it. And there are others.

Prayer Points:
1)    Please pray for us at IST Group. May we be faithful to plow, sow and reap the field we are planted in.
2)    May Zuzanna's steps across Croatia be a declaration to the enemy that transformation is on the way!
3)    Pray for Lika:
a.    Socioeconomic development is needed almost form the ground up.
b.    Pray that new laws would be passed giving incentives for industry to return to Lika
c.    Pray that agriculture would return. Pr 13:23 says “There is much food in the fallow ground of the poor and because of a lack of justice there is waist.” Lika is beautiful and full of natural recourses. Let’s cry out for justice in this land!
d.    Pray for our growing Lika team to know how to love well. In order to feed the spiritual needs of the people, we must know how to be the hands and feet of Jesus in Lika.
e.    Pray for Jesus to be lifted up so the people can see the power of His resurrection.
f.    Pray for IST Group and our efforts in the Lika Project. May we hear His heart and move to His heartbeat which will unlock His strategies for this largely unreached region.
4)    Pray for Upper Room Zagreb house of prayer. May God continue to bring those that want to go deeper with Him.

Please leave a Comment or Reaction so we will know you Prayed.
Posted by ISTgroup at 12:47:00 AM