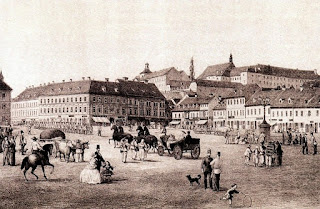 "Old Zagreb" was originally made up of two settlements, Gradec (also known as Gornji Grad) and Kaptol. The two settlements were situated on two neighboring hills, separated by a creek.

The existence of Kaptol, the settlement on the east slope, was confirmed in 1094 when King Ladislaus founded the Zagreb diocese. The bishop, his residence and the Cathedral had their seat in the southeast part of the Kaptol hill. Kaptol Street ran from the south to the north across the Kaptol terrace with canons' residences arranged in rows alongside. As the Latin word for a group or body of canons is "capitulum" (kaptol), so Kaptol got its name. The canons also ruled this settlement.

NOTE: Originally, a canon was cleric living with others in a clergy house or, later, in one of the houses within the precinct of or close to the cathedral and conducting its life according to the orders or rules of the Catholic church.

In 1242 Gradec received a charter of great privileges from the Hungarian King Bela IV to organize a city of artisans and merchants. Gradec, had their own autonomy, judiciary, privileges in crafts and trade, plus the right to organize fairs. They could travel to markets without paying custom duties and Gradec citizens were encouraged to build city walls for defense.

As these two areas of Zagreb developed over the centuries they had deep differences due to their inception; Kaptol, being clerical as church ministers and Gradec, being the merchant class which held as their main concern trade and commerce. Over the years there were many skirmishes between the two.

The spiritually alert in Zagreb recognize that this division in the early days of the city has the effect of a “spirit of division” that effects the city and even the country. Not only is there strong division in the political life of Zagreb but the churches are effected also. There have been many church splits and the churches have a history of discord amongst each other.

We do have hope! Throughout the course of several years, we have seen forward movement and some signs of healing. In the Upper Room HOP, where we pray for the country, we often pray for the churches to reject this “spirit of division” and come together in unity so they may fight the real enemy, Satan and his tactics. The creek has long since, been paved over and now only the keen observer can see a difference in the two areas of the city.

On another note: Today is a special day! On August 8th 2008 Jerry, started systematically praying for the Balkan countries, increasingly known today as Southeastern Europe. We carried an intercessory burden for this region for many years but on that date, eight years ago, Jerry heard the Lord say: make it systematic and develop a pattern of prayer. In 2009 the blog was created and intercessors begun to join in prayer and those interested in the spiritual condition of Southeastern Europe. This is likely how you landed on this mailing list. The blog became a catalyst to focused prayer on the spiritual, political and socioeconomic problems of Southeastern Europe.

To check out the archives of previous blogs, open the following: www.freebalkans.blogspot.com and www.istprayer.blogspot.com. Please note the name change from Freebalkans to ISTprayer in September of 2015 to align with Intentional Strategies for Transformation, our new ministry name.

Prayer Points:
1)    Let us focus our prayers on the spirit of division in Zagreb. It seems that the secular in Zagreb for the most part have passed on, no longer being concerned about the divisions of the past. Unfortunately, it still effects the government and the evangelical churches.
2)    The evangelical churches need to resolve these divisions in order to present the true message of Jesus Christ to the lost. Pray that Christians would have a revelation of Christ love as described in Matt 22:36-39.
3)    Christians should be an influence on merchants and encourage good business practices. Let us pray for Christian businessmen/women and the godly influence they can have on the business climate of Zagreb and beyond.
4)     Pray for Zagreb which is a city of influence. As the capital of Croatia, it is the largest in the nation, with a population of 1 million, and it is located in the center of the country.
5)    As the capital city, it is important that Zagreb has a healthy Christian expression and influence on the country. Pray for an evangelical explosion in Zagreb that will develop a Christian hub in order to affect the rest of the country. May there be a day when Zagreb churches are sending out evangelist throughout Croatia.

Thank the Lord for how we saw His love of Southeastern Europe for the past eight years. Many, many thanks to each of you who have lifted up petitions in prayer for this region. There is a reward waiting for you! Today, Southeastern Europe remains the lest evangelized part of the world, with only about 0.5% evangelical believers, but off in the distance we see a small cloud, the size of a hand! Come and pour out Your Glory, Lord!

Please leave a Comment or Reaction so we will know you Prayed.
Posted by ISTgroup at 12:19:00 PM