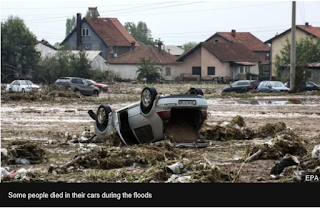 The victims' bodies were found on Sunday morning after the storm passed. Several people are still missing.

Some of the victims drowned in their cars. Parts of the city's ring road were swept away in the floods, dragging cars into nearby fields.

Three-and-a-half inches (93mm) of rain fell in Skopje in the storm - more than the average for the whole of August.

The water level reached as high as five feet (1.5 meters) in some of the affected areas, reports said.
"Everything was a mess. Televisions, the fridge, the sofa, everything was floating... it was a nightmare," said Baze Spriovski, a 43-year-old from Singelic in the outskirts of Skopje. http://www.bbc.com/news/world-europe-37002364

Macedonians are a people group that have come together over many centuries. The assimilation of peoples have been; in the ancient time there was the Thracian people and then the Illyrians, In the late 6th century BC, the Achaemenid Persians stayed awhile put they retreated as the Greeks became stronger, then in the 4th century B.C. Phillip II begin to establish what could be considered the first Macedonians and gave them a country. Phillip’s son Alexandra the Great built a fighting force and conquered half the known world. From the fall of Alexandra until 1991 (approximately 2100 years) the Macedonian people were subjects of multiple empires that tried to control the Balkan land mass; Romans, Greeks, Serbians, Bulgarians and Albanians. By majority Macedonians are predominately Slavs due to the Slavic invasion of the Balkans in the 6th thru 8th century.

The question begs to be asked, why would God establish Macedonia as a nation after 2000+ years of occupation? Is there a seed that was dormant for all that time and now is springing forth? Although the Macedonian people have intermarried with many nationalities, they draw upon the days of Alexandra the Great as their inspiration for the future.

In addition, 33% of  the Macedonian population is ethnically Albanian. The Macedonians and Albanians do not assimilate well and so there is constant friction between the two groups.

Prayer Points:
1)    Pray for the Macedonian people to recover from the unexpected flooding. May God help them in the process to see His mighty hand.
2)    Please pray for the Christians in Macedonia to rise up and be helpful to their neighbors regardless of nationality.
3)    We are often reminded of Israel and how that after 2000 years they became a nation again. In a way this is also true with Macedonia. Pray that Macedonians would recognize that they have destiny as a nation.
4)    Pray for the spheres of influence in Macedonia; family, religion, education, business, government, media and arts/entertainment. Ask the Lord to prepare people that honor Him to take leading positions in those areas.
5)    This past spring, we spent some days in Macedonia visiting churches and also the House of Prayer. Let us pray for the Macedonian Christians as they live for Him in a culture where few know of His love.
6)    Let us thank the Lord for the House of Prayer in the capital of Skopje. May those brothers and sisters move into a realm of total victory as they lift up Jesus over the nation.
7)    Let us believe for an out-pouring of God’s mercy upon Macedonia. Lord come and purify Your children so You can flow through them to show Your love.
8)    May the Christians go the extra mile to reach out to their Albanian neighbors. Macedonians and Albanians can live in peace when Jesus is their peace maker.

Please leave a Comment or Reaction so we will know you prayed.
Posted by ISTgroup at 1:38:00 AM