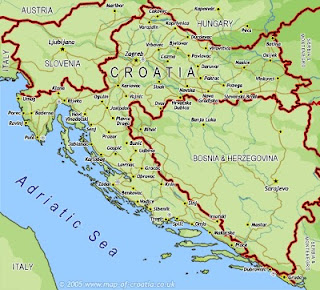 IN THE NEWS: Croatia’s Far Right Weaponizes the Past

“The European Union’s newest member, Croatia, has an unabashed and strong-willed fascist in its new cabinet — one who makes the right-wingers in power in Hungary and Poland look like wimps. The contested figure is Zlatko Hasanbegović, a 42-year-old historian who became culture minister in late January after the country’s latest election produced a new right-wing ruling coalition. Hasanbegović had been a prominent figure in a small ultra-rightist party that openly extols the fascist World War II-era Ustasha movement (He left the party and is now unaffiliated, though he has never renounced it). As a historian, his work focuses on downplaying the crimes of the Ustasha and cautiously rehabilitating its ideas. Unlike the right-wingers in Poland and Hungary who are eviscerating their states’ democratic structures, the Croatian nationalists are waging their war within the realm of political culture — for now. Their goal is to lay the groundwork for an eventual assault on the country’s liberal democracy”, writes Foreign Policy.
http://www.total-croatia-news.com/politics/11762-foreign-policy-magazine-criticises-croatia-s-new-government

In the Balkans, digging up the political past has no redemptive value. The past is full of ethnic, territorial and political ghosts that only fuel revenge. Hatred runs deep and generations have been passing it on for a thousand years. It even penetrates the churches here. Having been in Croatia now for over years, we have seen the ugly face of back-biting, slander, dishonor and perpetual division.  As citizens of the Kingdom of Heaven we know how to combat these continual divisions, we must come in the opposite spirit. At ISTgroup our desire is to operate from a place of honor regardless of who we are dealing with. We cultivate honor in our lives and others as we encounter Him daily in the Upper Room here in Zagreb. At the ISTgroup we as a team are about about to begin a workbook study on the “Culture of Honor” by Danny Silk. If you have not read this book, we highly recommend it.

Prayer Points:
1)    Pray for the government of Croatia; right wing, left wing, they all need Jesus.
2)    There is fear and hopelessness among Croatians regarding the direction of the government. We pray for Jesus lovers to raise up into all spheres of government and society in order to influence culture in Croatia.
3)    Croatia, just like every other country in the world, needs Godly men and women to rise up and call upon the Lord to redeem their country from corruption. Let us pray for the Lord to raise up a Moses in Croatia. Someone that hears the cry of their people.
4)    Division in and among the churches is limiting spiritual and numerical growth in Croatia. Let us pray that Christians would be convicted of slandering other Christians.
5)    Help us Lord to honor everyone. Let us pray for the revelation of a culture of honor to take root in our Croatian brothers and sisters.
6)    The redemption of a country always starts with intercessors. Lord, we pray for the coming together of intercessors to pray for Croatia. The burning hearts need to unite and cause a fire.
7)    At the Upper Room here in Zagreb, we are praying for the country. Pray that we would stay faithful to our calling. Pray that we endure until we see a greater light shine and Lord show us how to maintain the light.
8)    It has been prophesied that God is raising up a hidden Christian army in Croatia. Let us all pray into this word and ask God to bring them forth quickly.

The following video is a powerful prophetic word for Europe that was given by Tim Morley near the end of April 2016. Tim Morley is introduced by Aliss Cresswell of Morning Star Europe.
https://www.youtube.com/watch?v=uQfs7nSHGGU