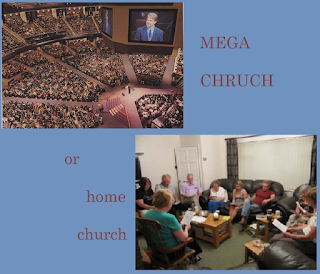 I Have a Dilemma

I love history and I love my family the universal Church. The Bible inspires me because it is divinely inspired. I have concluded that local churches and denominations are like people. No church is alike. With this being true, then why do we bicker over doctrines and methods of worship?

Church division is not my dilemma. My dilemma is big church or small church, mega church or home group. Which is best?

In the big church there was lots of things going on. The worship was high quality, the children’s ministry covered all ages, ministry for teenagers, singles, married couples and the elderly. There was even outreach to the poor, the streets and a ministry to unwed mothers. In the big church there was offered cell groups or home groups. I noticed the home group attendance seemed to vary at times according to the attention it got from the leadership. Mater of fact, I noticed ministries would rise and fall in reflection to the attention they received from pastors and leading staff.

The cell groups were usually good. People made friends and were usually ministered to on an individual basis. Some cell groups I attended were fairly structured and some were rather loose. There were groups located in the area of town you lived in and there was groups organized for those of like-minded interest or ministry outreach. When I was single I was in a local cell group and after marriage in a family group and a prayer group.

We were all part of the large church where we would worship together and hear a relevant Word from the pastoral staff every Sunday. In this church we attended, there was even a set of lessons or catechism we were encouraged to attend and study. These studies helped us to mature in the Lord and come into a unity of beliefs or doctrine.

Although this church we attended provided many ways to get plugged in, get ministered to and for us
to minister to others, I noticed there was the presence of people on the sideline. These were people who would attend Sunday but did not participate in things offered during the week. I have a feeling these people on the sideline were either traditional church goers or either had a limited commitment. I don’t want to pass a negative judgment on these people because I didn’t know their situation. (There are seasons in life when there may be greater involvement outside the church, like work, school, etc.)

This particular church was of a Charismatic expression and many people matured in the Lord and went on to minister in the gifts of the Spirit.

Then there was a time when my children had grown up and my wife was working many hours. I would attend a home group not associated with the big church. This home group had people that came together mainly because they knew each other from work, school or from a church. They just seemed to be people seeking an unstructured community where they could receive ministry from or they could minister to others. This group would meet weekly and there would be 10 to 20 people. The couple who owned the home were we meet would loosely guide the meeting. There was usually snacks and sometimes full-blown meals. We would usually have a short Bible study and discuss the main theme in the study. Often visitors would come that were friends of the core attendees. The lead couple were good about ending the meeting with ministry to those that desired it. There was even opportunities for outreach to their community and a local school. Overall this was a healthy group. The good thing I liked about this group was that the spiritual atmosphere was serious.

So I have experienced healthy home groups as part of a large church and also attended independent home groups.

In my early years as a Christian, I attended a few home groups that were set up more like a small church. These were good for new believers. Most of these did not have a connection to a larger church. Some of these small groups were on their way to becoming structured churches. This is often how local churches start out. But there was a problem with many of them. Often, they were led by people that had been hurt in another church. They had an underlying bitterness against the established churches. Often when they came together, they would tailor their teaching against “them”. They felt only they had the correct interpretation of the scriptures. (This exclusiveness is how denominations or cults from.)

I seen most of these exclusive groups either go into scriptural error or just disband with the members being hurt.

I do have to add a personal note here. My experience with these exclusive groups was during the Jesus Movement of the 70s. Many hippies were getting saved and most of the established churches just did not except them or know how to minister to them. So groups formed as a backlash against being shut out. We were just filled with our newfound joy and we just met wherever we could.

So let me get back to my dilemma. Which is best the big church or the small group? My conclusion, as of now, is they both have positive and negative elements. A big church that has small groups where people can get individual ministry is good; and a small group that has oversight from a larger church or network is good also. Small groups can be at risk if they do not have a well versed and balanced teacher. Even a small group needs an authority or oversight entity.

Actually, I think I have talked myself out of my dilemma.