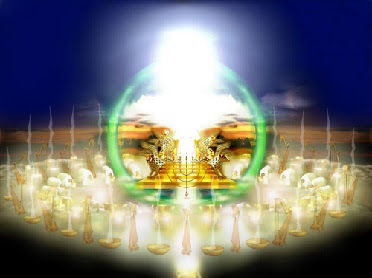 King David tapped into what is happening in Heaven at all times. God opened his understanding to what worship is like before God’s throne. See Revelations chapter 4

So what did David do when he became king, he set up “worship as is in heaven” on Mount Zion. 1 Chr. 15: 16, 16:4-6
And he appointed some of the Levites to minister before the ark of the Lord, to commemorate, to thank, and to praise the Lord God of Israel: 5 Asaph the chief, and next to him Zechariah, then Jeiel, Shemiramoth, Jehiel, Mattithiah, Eliab, Benaiah, and Obed-Edom: Jeiel with stringed instruments and harps, but Asaph made music with cymbals; 6 Benaiah and Jahaziel the priests regularly blew the trumpets before the ark of the covenant of God.

This begin 33 years of worship in the (tent) tabernacle David had set up on Mount Zion.
Psalm 22:3
But You are holy, Enthroned in the praises of Israel.
Isaiah 63:7
I will mention the lovingkindnesses of the Lord And the praises of the Lord, According to all that the Lord has bestowed on us, And the great goodness toward the house of Israel, Which He has bestowed on them according to His mercies, According to the multitude of His lovingkindnesses.

From these scriptures we can see that God extends favor to a nation or people that bring Him praise. Israel became a great nation during David’s reign and then even greater when Solomon took the throne.

When we worship God here on the earth as it is in heaven, then we should expect the blessings of the Lord to be upon us. We see that during the reigns of David and Solomon there was great favor from God upon Israel. I am convinced that this favor was because of the 24/7 worship in the Tabernacle of David. It was as if a canopy was put over Israel while worship was happening. Why not have the same thing today over our nations?

We should strive to worship the Lord with our lives. As more and more worshipers gather, then the greater the power of our worship.
Joel 2:1
Blow the trumpet in Zion, and sound an alarm in My holy mountain! Let all the inhabitants of the land tremble; For the day of the Lord is coming, For it is at hand:

As the worship went up to heaven from Mount Zion, God caused proper alignment to occur in Israel. All that goes into maintaining a nation, lined up into proper order. If this happened back then for Israel, why not now?

It is the duty of the Church to bring this about in individual lives and in the nations.
Acts 15:13-17  And after they had become silent, James answered, saying, “Men and brethren, listen to me: Simon has declared how God at the first visited the Gentiles to take out of them a people for His name.  And with this the words of the prophets agree, just as it is written:
‘After this I will return
And will rebuild the tabernacle of David, which has fallen down;
I will rebuild its ruins,
And I will set it up;
So that the rest of mankind may seek the Lord,
Even all the Gentiles who are called by My name,
Says the Lord who does all these things.’

Did not the Lord have the Apostle James quote this verse from Amos 9:11-12 as a command to the church? It was a prophetic word of what God wanted to do with the Church.

We as the Church should cooperate with God to see this type of worship instituted upon the earth.

In the Lord’s Prayer did not Jesus ask us to pray:
“Your kingdom come.
Your will be done
On earth as it is in heaven.”

We are seeing more and more Christians and churches across the earth beginning to understand this revelation and move out in faith to facilitate as best they can this worship.

Personal Opinion: I believe the Lord wants every nation to have a National Tabernacle of David and it is the responsibility of the Church to cooperate with the Lord to build it. When “worship on earth, as in heaven” is functioning, then the Lord will come back to claim His sheep nations. (Matt. 25:31-33) By-the-way, this is an over coming attitude rather than waiting around for the rapture.