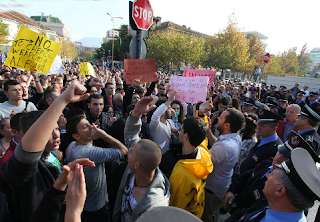 The pyramid schemes started operations in 1991. Their activity was based on making payments to old investors using money contributed by new investors. The first scheme was that of Hajdin Sejdisë, who later fled to Switzerland with several million dollars. It was followed by "Sudja" of shoe factory worker Maksude Kadëna in 1993, then the "Populli" foundations run by an opposition politician, and "Xhaferri". By the end of 1996 the schemes peaked. The interest rates they offered were very tempting; Sudja offered 100% interest. The schemes were not criticized immediately because of bad banking laws. Despite IMF advice to close these schemes, the government continued to allow their activities, often participating in them. Between 8–16 January 1997 the schemes collapsed. On 22 January the government froze the Xhaferri and Populli firms. "Gjallica", another firm, was nearly bankrupt, while "Vefa", which had invested in Albanian hotels, fuel and factories, continued normal activity. The economic crisis was the worst in Albanian history.

The number of investors who had been lured by the promise of getting rich quick grew to include two-thirds of the population. It is estimated that close to $1.5 billion was invested in companies offering monthly interest rates ranging from 10%-25%, while the average monthly income was around $80. People sold their homes to invest. Immigrants working in Greece and Italy transferred additional resources to the schemes. When the realization that most of the money was lost, the people begin to protest, forming rebel gangs that took to the streets. Many government buildings were attacked, looted and burned. Chaos was everywhere, especially in the south. The ruling party was blamed and the rebel groups demanded their removal. The army ammunition depots were raided by rebel gangs and even the army ended up giving out guns to citizens so they could defend themselves. Although the government quelled revolts in the north, the ability of the government and military to maintain order began to collapse, especially in the southern half of Albania, which fell under the control of rebels and criminal gangs. Prominent organized-crime figures escaped from prison and put together gangs, effectively taking control of many areas. Gangs looted banks, took hostages and grabbed businesses. The chaos was complete and the whole country (except for the capital, Tirana) was completely paralyzed. The rebellion started in January of 1997 and did not end until August of the same year.

Damage from the rebellion was estimated at 200 million dollars and some 3700 to 5000 wounded and 2000 dead. Lawsuits were filed against the bosses of the rogue firms. In elections in June and July 1997, Berisha and his party were voted out of power, and the left coalition headed by the Socialist Party won. The Socialist party elected Rexhep Meidani as President of the Albanian Republic. All UN forces left Albania by 11 August. >Full details can be read at https://en.wikipedia.org/wiki/Albanian_Civil_War

Over the many decades of hardline communism, atheism reigned supreme and religious services were forbidden. This left the people spiritually empty with no moral base. This ponzi scheme was a symptom of misguided hope. There was no wisdom to govern as personal gain excelled through criminal minds. No fear of God.

It is good news now to report the Gospel is spreading across the Albania and changing the hearts of those that once had little or no hope. Many churches and mission organization are reporting many coming to faith.

Prayer Points:
1)    God is so gracious. He will not abandon us forever. He loves the nations and He loves Albania. Pray that a humbled people will find full forgiveness in Jesus.
2)    The hope we have in the resurrected Savior gives us strength and assurance. May the Gospel message continue to grow in the cities of Albania.
3)    Lord, may the Holy Spirit go forth across the land preparing the people’s hearts to receive the Gospel. Lord, release an atmosphere of hope.
4)    The Gospel will be preached to all men before the end comes. Lord, we ask for the doors to be fully open for the proclamation of the Gospel in Albania.  4)    Matthew 24:14 And this gospel of the kingdom will be preached in all the world as a witness to all the nations, and then the end will come.
5)    Let us pray for an excitement to fill the hearts of the Albanian Christians. May they move in the power of the Holy Spirit and let Jesus shine through their lives.
6)    May the churches in Albania be safe places for many to receive healing and abundance in this life.     John 10:10 The thief does not come except to steal, and to kill, and to destroy. I have come that they may have life, and that they may have it more abundantly.