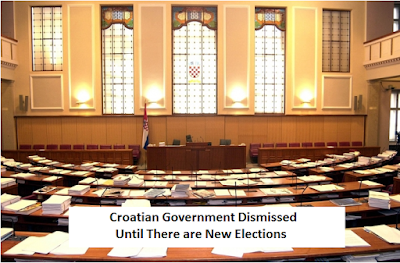 We need to pray for Croatia.

“We cannot pretend that nothing is happening. The majority of MPs have submitted a request for the dissolution of Parliament, and it is clear that this means that the work of this Parliament has come to the end. Citizens demand new elections, and therefore we demand that you stop this session and include the dissolution to the agenda”, said Peđa Grbin (SDP).

-    Because of the above action in parliament the deputy prime minister has resigned and it is expected that the present prime minister will resign or be voted out. … we will vote on the dismissal of Prime Minister Orešković. We have already said why we are going to do it, due to the non-functionality of the government and its leadership. <Read More>
-    We started praying for the Croatian government 7 to 8 months ago. We prayed that the government of Croatia would be blessed, not to fall apart. We prayed often that corruption would be exposed. There has been some “under-handed” things exposed. The reality is that the constitution is in force but there just has to be new elections.
-    The gay sub-culture marched in the streets across Croatia recently demanding more rights. They were also joined by the pro-abortion advocates. <Read More>
-    Croatia’s President and Serbia’s Prime Minister to Meet on Monday - Croatian President Kolinda Grabar-Kitarović and Serbian Prime Minister Aleksandar Vučić will meet on Monday in Croatia and Serbia to sign a political declaration “of exceptional importance”, that will cover issues of minorities, missing persons, borders and succession,… <Read More>

Prayer Points:
1)    The redemption of a country always starts with intercessors. Lord, we pray for the coming together of intercessors to pray for Croatia. Croatians need to get desperate about saving their country.
2)    New elections are projected to be the first of September. This is a chance for a new direction for the country so let us pray for God’s favor.
3)    Let us pray now for men and women of good character to run for office.  May they secure positions at the head of parties, receive financial help that is not attached to favors and truthful media coverage.
4)     Twenty-three years ago Croatia and Serbia had just ceased a bloody war that left Eastern Croatia devastated. Pray that this meeting between the president of Croatia and the prime minister of Serbia will advance peace in the region.
5)    In light of the attack on gays in Orlando, Florida, let us pray for the gay community in Croatia. Of course we want them to come to the salvation knowledge of Jesus. We as Christians in Croatia should approach them with love and let the Holy Spirit deal with any sin in their lives like He dealt with ours.
6)    Monday night, June 20th, Upper Room Zagreb hosted “Burn”. This was a team of seven people traveling through the Balkans lifting up extended times of worship. We believe this dedicated time of worship broke spiritual strong-holds over Croatia. Pray that more Croatians begin to join in on the prayer sets.